First there is the question: are immigrants disadvantaged in relation to non-migrant populations in destination countries? The employment and pay gaps faced by migrant groups have been highlighted in a wide range of studies and the Review will be bringing this evidence on immigrant inequality together. But the full story is more complicated.

International migrants tend to be ‘positively selected’ relative to their peers in their country of origin (Figure 1). That is, they tend to have higher-than-average education, be healthier, and so on. They are also affected by opportunities for mobility in the country of origin – migration may enable a form of upward mobility that is unattainable in the sending country. This means that when looking for opportunities, highly selected migrants may seek out countries with higher inequality, where they envisage greater rewards for success. This has implications for inequalities in the sending country as well as in destination countries.

Figure 1. Migrant selection: education and employment status of overall population compared with those preparing to migrate, high-, middle- and low-income countries of emigration, 2010–15. 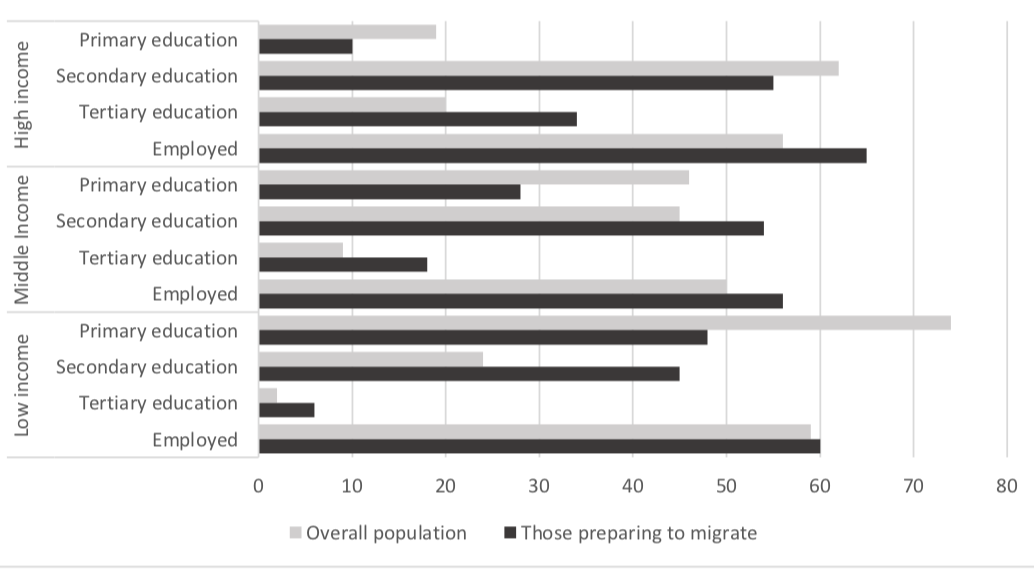 Source: Adapted from tables 10–12 of S. Migali and M. Scipioni, A Global Analysis of Intentions to Migrate, Report for the European Commission, JRC111207, 2018.

Migrants do not only cluster among the more disadvantaged in terms of pay and employment. They are also among the top earners, though there are clear differences according to time of arrival and country of origin. For example, immigrants from Western European countries and North America tend to have higher-than-average earnings while those from Eastern European and African countries have lower earnings on average. Migrants may themselves thus contribute to overall earnings inequalities in the countries in which they settle, even if the impact is not generally large. There are also large inequalities between migrants.

Nevertheless, migrants often face a gap between their skills or qualifications and the returns they get to these skills. In the UK, migrants (particularly more recent migrants) tend to have high levels of qualifications (see, for example, Figure 2), but many with high qualification levels are working in jobs that require much lower levels of skills (Figure 3).

Figure 2. Qualification levels among UK-born and among immigrants, by time of arrival, England and Wales, 2011

Source: Derived from Office for National Statistics, 2011 Census Table LC5801EW, ‘Highest level of qualification by year of arrival in the UK’, Crown Copyright.

Figure 3. Distribution of workers in broad nationality groups by whether they are matched, over-educated or under-educated for their job, 2016 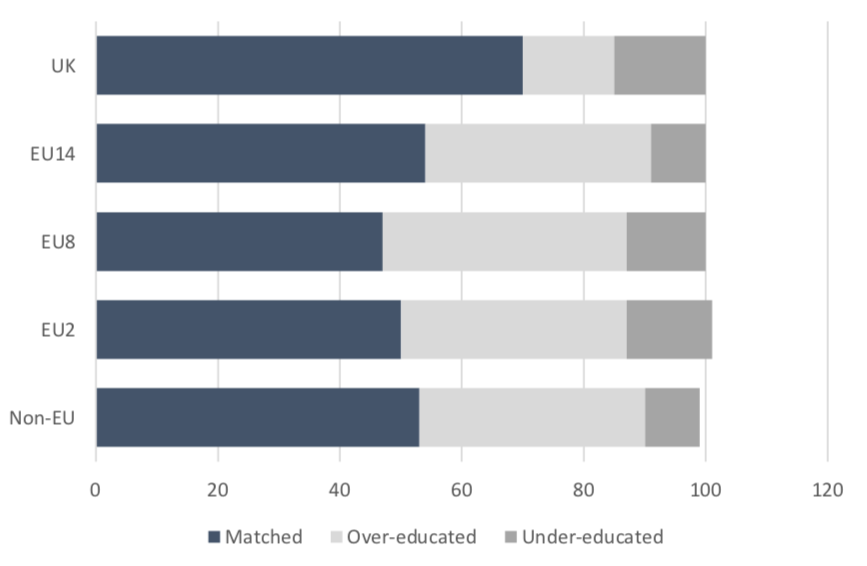 Source: Adapted from figure 14 of Office for National Statistics, ‘International immigration and the labour market, UK: 2016’, 2016. EU14 represents those countries that were part of the EU prior to the 2004 accession of the EU8 countries. EU2 is Romania and Bulgaria.

This presents a conundrum if ‘skill’ is evaluated in policy terms by the pay it attracts rather than by the qualifications or ‘skills’ that people have.

The issues for social policy and inequality reduction are, therefore, how to retain positively selected populations, while not increasing inequalities among settled populations, and how to ensure that skills are appropriately used.

It should be clear from this discussion that the relationship between migration and inequality can be approached from a number of different angles over and above the much-studied issue of whether migration has effects on inequality of populations in destination countries – for example, by affecting their own wages and employment. We will be grappling with all of these issues, and many more, in the study of migration as part of the Deaton Review. 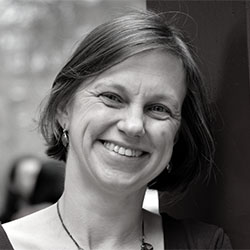